By Colin Grant and Andy Knott

When the MGB was launched in 1962 it became an instant hit and with over 500,000 being built in Abingdon between 62 and the factory closure in 1980 it became the most popular MG ever produced. In 1984 a good friend purchased an MGB, although production of the MGB had ceased only four years earlier his car was already 20 years old and looked very tired so he set about restoring it.

It needed all the normal repair panels, sills, wings etc and it took several years to source the parts and restore. When he added up the total cost it came as a shock and probably brought about his subsequent divorce! Within months of finishing the project  he read in a classic car publication that new MGB bodyshells were going to be produced again at a very reasonable price, if only………………………

Today the company that started to produce bodyshells in 1988 is still going strong and recently the opportunity arouse to visit their 50,000 square foot premises. On arrival at the British Motor Heritage (BMH) building at Witney in Oxfordshire, which is only 30 minutes from the MG Car Club HQ in Abingdon we were greeted by Chris Gardener, Sales and Marketing Manager, who sat us down with coffee and explained the history of BMH. The background of the company is fascinating and goes back to the mid seventies. It all started with the formation of Leyland Historic Vehicles in 1975 which brought together historic vehicles and archives of BL’s subsidiary companies.

It was then renamed BMIHT (British Motor Industry Heritage Trust) in 1983 and became BMH (British Motor Heritage) in 1984. From the outset LHV strove to improve the availability and quality of genuine parts for British classic vehicles, this culminated in the remanufacture of the MGB bodyshells in 1988, of which they now produce around 60 shells a year. On ordering your bodyshell you can specify whether you want your shell delivered in primer or painted in the final colour, or you can even have Heritage carry out the restoration for you.

If you are planning on using the car competitively Heritage can even seam weld the shell for additional stiffness and carry out other competition requirements. Since the introduction of the MGB bodyshell additional shells have been added to the Heritage product line up. They include the MG Midget/Sprite, Triumph TR6 and Mini bodyshells, with up to 42 individual derivatives being produced across the range.

To continue the history, when BMW took over the Rover Group in 1994 it was decided to sell off various assets. Amongst these were BMH which was sold in 2001 to David Bishop, Neil Morrick and John Yea, all ex management of British Leyland/Austin Rover. It was David Bishop who tirelessly scoured the BL Empire for the original tooling to reproduce the MGB bodyshell. They ran the company as an independent concern until David Bishop and Neil Morrick retired in 2006. John Yea then took over as Managing Director, a position he holds to this day. At present BMH have a network of 50 Approved Specialists in the UK and 16 in Europe and the USA, and specialists in Japan and Australia.

The quality of bodyshells that BMH produce today is excellent, they are phosphate and electrophoretically primed using a modern industry standard full immersion process and are manufactured by using 100% original factory press tooling and assembly jigs meaning they are an exact specification and will resist the dreaded tin worm for many years that most older MG’s are unfortunately prone to.

As well as bodyshells a whole host of panels have been produced to the original specification using original plans and drawings. In Andy’s Mini days he once made the mistake of purchasing an inferior A panel as it was cheap, after hours of fettling he gave up, turned it into scrap metal and ordered a slightly dearer but far superior BMH panel. It fitted like a glove and within an hour was spot welded in place. The old saying you get what you pay for really does apply.

Chris took us to meet Les Holmes who was going to demonstrate the art of producing the MGB wing. Les has been with BMH for eleven years, but had been in the industry for nearly 40 years. He now spends most of his time making MGB wings. He said that each wing takes him around one and a half hours to assemble, the later type wings for the rubber bumper cars taking longer  as more fettling is involved in getting  it to the correct specification.

As Les took us through the procedure of putting a wing together we had the chance to ask him how many MGB wings he has produced over the years and he reckoned close to 7,000, that’s probably why he made it look so easy. Each MGB wing is made from six pieces of steel that get delivered directly from their press factory, each piece needs cleaning up and then spot welding or seam welding together. It was great to see a true crafts man in action who’s enthusiasm and eye for detail was second to none. Yes the MGB wings do command a premium but you only have to see the work that goes in to each one to see why.

After meeting Les we continued our tour of the BMH premises and saw Mini shells in various stages of production. MGB shells are made in batches and only when enough orders have been received. They can even produce the early pull handle body shells but only if the customer can supply the transmission tunnel from the donor car, as this is one of the few items they don’t have tooling for. It’s interesting to note that BMH have now been producing MGB bodyshells for some 22years, that’s four years longer than the B was in production.

We were then shown items produced by Tex Automotive, a firm that was taken over by BMH in 2008. They are famous for their range of wing mirrors and wiper arms, production of which is now undertaken at Witney. Another firm BMH have taken over is Powerstop Brakes, the acquisition of which took place in 2007. They are well known as a distributor of EBC braking equipment and compliments BMH existing products.  Chris explained the reasons behind taking over these firms was because the products they produce of a similar high quality to that being produced by BMH and therefore compliment the existing product ranges.

Chris explained that at present around 1500 product lines are currently being listed with new items being viewed on a regular basis. One of the items under review is panels for the MGF, as some tooling has already been acquired. The MGF/TF hardtops have been produced by BMH for some time now and their range even includes colour matched and striped hardtops for the new MGTF 85. Chris explained  that to help promote their product range the new Motoring Classics website (www.motoringclassics.co.uk)  was launched last year and includes their entire catalogue of accessories available from BMH and through the Approved Heritage Specialists.

The basic theme is Great British Brands and this means that in addition to the Powerstop/EBC and Tex Automotive ranges the website now offers Minilite wheels, Samco silicone hoses and Raceglaze polishes. The most recent addition is a selected range of Greycar motoring clothing. BMH are always looking to add to their portfolio of products to support the Classic Car business. To compliment this Motoring Classic mini magazine has been produced exclusively for BMH and is distributed through a number of sources including the MG Car Club.

We concluded our tour with a visit to the vast stores and the computerised part picking system that is in place, where we met John Yea and Operation Manager Dave Jane. As we left the British Motor Heritage premises we were both very impressed by our visit and took a moment to reflect on what we had just seen, without this company how many MGBs, Midgets, Minis etc would have been scraped over the years, it makes you wonder…. 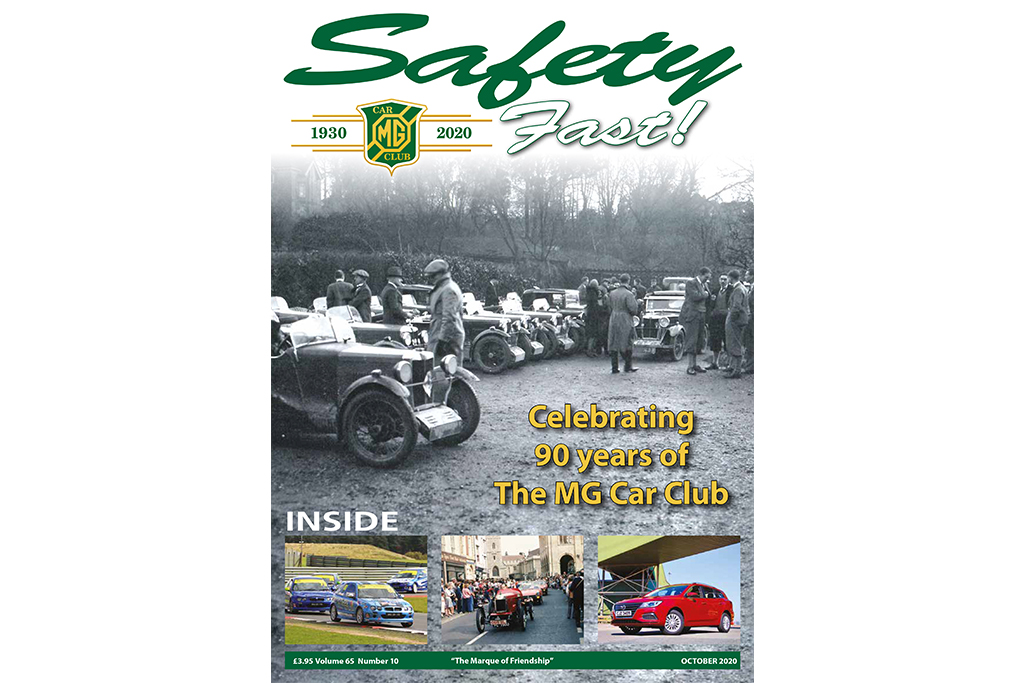