Words and Photos by Colin Grant and Andy Knott

Two MGAs with totally different personalities, we endeavour to find out what makes them tick

If you attended the November Classic Car show last year at the NEC, I’m sure you would have seen the special MGA Graduate converted car on the Oselli stand. We were keen to find out more about this car and were pleased when we had an invitation from Oselli’s Paul Eales to go along to their premises and try it out.

Oselli have a long history of tuning and preparing cars for motorsport. It all started in 1960 when David Oldham and Dudley Gliddon, who were engineers at BMC, decided to gas flow cylinder heads in their spare time starting in a small garage in Wheatley, Oxfordshire. At this time they went with the name Oxford Engine Services. The Oselli name was conceived as being more appropriate to motorsport: it was a derivative of Oxford Engine Services (OES or OSE) with an Italian ring to it (lli).

David and Dudley soon parted company and David branched out into supplying tuning components for BMC A and B series engines as well as parts for Ford and Lotus Twin Cams. Oselli then had a series of moves over the years from Wheatley to Baynards Green, on to Eynsham, Oxford, Witney and where they are based today at Great Horwood, near Milton Keynes.

They also had a change of owners, with David retiring in 1993 and the business being sold to Barry Coombes. As part of Barry’s plan for the company David Eales was invited to join. David worked as an international troubleshooter for Aston Martin, travelling the world for the company. David had previously contacted Oselli to undertake work for Aston Martin, and when Barry outlined his plan for the company David decided to join in early 1994. Eventually Barry decided to sell his share in the business, which David bought. Oselli then consisted of the engineering side coupled with sales and classic car restoration.

Their new premises at Great Horwood consist of a large showroom, rolling road, and motorsport preparation department for Aston Martins, MG, and other upmarket cars. David’s son Paul has been racing for some years, firstly with an MGB GT, then on to an MGB roadster and an MGA Twincam into which they fitted one of their overbored full race FIA MGB units. He then returned to racing an MGB again. The company has diversified into competition car management, whereby they make an undertaking to their clients to do all the necessary engineering and repairs and have full responsibility to get their race cars to and from race meetings.

Paul had arranged for us to try another MGA alongside the Graduate which was fitted with a Sierra type 9 gearbox, uprated engine and other upgrades, but leaving the car with a ‘standard’ look. This was the ‘A’ we tested for Safety Fast! back in 2008, so it was good to reacquaint ourselves with the car.

With both cars parked side by side outside the Oselli premises we chose the ‘standard’ A to test drive first. Although fully restored some years ago, it still felt quite fresh with the steering, brakes, and handling being spot on.

The countryside around Oselli’s premises is stunning, with the winding country roads being ideal to test dive an ‘A’. Although cold it was a beautiful sunny day with lovely wisps of cloud in the sky, perfect for open-top motoring. We chose a route around the Winslow and Great Horwood areas which were ideal and included some long straights where we were able to give the car its head.

Out on the road the power delivery was very smooth, benefiting from the Oselli 1950cc MGB engine. The five-speed Sierra box, although slightly notchy, matched perfectly with the B engine. The uprated servo-assisted MGB brakes pulled the car up effortlessly without having to stand on the pedal. The handling, having been subject to uprated bushes and shock absorbers, was very precise and gave confidence when going into a bend. The ride was good, being firm but very stable.

Driving along our chosen test route the ‘A’ came into its own, taking the sharp corners we encountered with ease and very little body roll. The extra power from the ‘B’ engine was ideal when overtaking slower traffic, allowing me to overtake quickly and safely. Keeping up with modern traffic was no problem with the 1950cc ‘B’ engine burbling along quite happily.

This car was a joy to drive and, although updated, kept the look of a standard car whilst benefiting from modern upgrades. Would I like one…….you bet!!

Reacquainting myself with the Oselli MGA was like meeting a good friend after a long absence; we had a lot to catch up on, and this test drive could go on for a while! Externally this Old English White A looked stunning, but standard. Opening the bonnet was a whole different story, though. The red rocker cover emblazoned with OSELLI leapt out at you, as did the blue ‘Oselli Tuned’ plaque mounted just in front of the radiator, proudly displaying 1950.

Hunkering down in the plush red interior, which goes so well with the OEW paintwork, I instantly felt at home as I reacquainted myself with the MGA switch gear. A flick of the key and a tug on the starter pull, the B series engine burst into life with its distinctive burble. As we headed out on quiet, twisty country roads around Great Horwood and Winslow the 1950cc engine made it easy work keeping up with the modern cars, with oodles of torque and the engine eager to pull in any of the five gears.

Five gears, because this one was fitted with a Ford type 9 gearbox as used in the 1980s Capris and the whole range of Sierras. As much as I do love the standard MGA box, I was thankful for the extra gear when pushing along at speed as it brought the revs down enough so there was no drone and strain on the engine. All too soon it was time to pull over and reluctantly hand the keys to Colin to take us back to Oselli’s base at Little Horwood. I loved driving that A, with the slightly notchy Ford gearbox reminiscent of times gone by, but I was keen to try Oselli’s latest creation, dubbed the Graduate!

The first Oselli Graduate dates back to 1988 with an updated MGB. The name Graduate refers to the upgrades on offer. Our test car was conceived in 2018 and was fitted with a 1950cc stage 2 lightened and balanced ‘B’ Series engine, Vitesse 5-speed Mazda gearbox, Weber 45 DCOE carburettor, uprated suspension, servo assisted brakes, and electronic ignition. The body kit consists of a louvered bonnet, reduced windscreen height, bonnet retaining straps, fixed point seat harness plus other options. The test car looked amazing in its colour of Old English white with black spoked wheels.

The Graduate is not a car for the purist, but as soon as I set eyes on it I liked what Oselli had done. It’s like the MGA of the 21st century! The chrome grille and headlamp surrounds had been replaced with matt black items, the bumpers have been removed and a valence reminiscent of an MGB Sebring looked purposeful on the front of the A, even the spoked wire wheels were black, with the large MGB silver calipers jumping out from behind the wires. The windscreen had been cut down to make a low-slung aeroscreen, and the most visually striking feature being a single seat hump that had been added behind the driver’s head. Walking around the car with the two large intakes either side of the grille ready to gulp in plenty of fresh Buckinghamshire air, and an exhaust tailpipe protruding just in front of the rear wheels, one either side, the Graduate would look more at home parked in the pits of a race track than parked in the tranquillity of Little Horwood. Sitting snugly in the red leather seats, key turned, I pulled the starter in trepidation. The engine burst into life, blipping the throttle the large Weber sounded eager and the noise from the handcrafted exhaust was…loud!

Being a car prepared by Oselli, it was well sorted in all areas: whether braking hard for a sharp bend or pushing through said bend, the Graduate behaved impeccably. I am a big fan of the Oselli 1950cc engines, with this being no exception, although driving through the built-up areas I did feel that the large Weber was more akin to a life on track after driving the previous A with the super smooth twin SU setup. Handing the keys to Colin and clambering into the passenger seat I was able to admire the work that Oselli put into their cars – they definitely know their way around an MGA.

Once Andy had test driven the car and handed over to me, the first impression was that it was built for a purpose: speed and noise. The Tubular Long Branch twin side exit exhaust system fitted to this car was… ummm… noisy, but Oh what a sound!! It sent the hairs up on the back of your neck. This coupled with the induction roar of the Weber was music to my ears.

When driving through built-up areas you really had to lower your speed to 20mph, to keep the noise down as we didn’t want to upset the locals. The power delivery is quite exhilarating as it pulls like a train. This, together with the super slick Vitesse gearbox, which is from a Mazda MX-5, made it a joy to drive. The car rode firmly, but comfortably and absorbed bumps well with good stability.

We did some of our pass by pictures on an S bend and the car took the bends as if on rails, a testament to Oselli’s set-up. The servo assisted brakes, being a similar set-up to the previous ‘A’ we tested, were excellent and brought you to a halt in a controlled manner.

You would have to pick your days when going for a drive as the model tested had a reduced-height front windscreen with no provision for a hood to be fitted. To get into the boot you would first have to remove the extended head rest, but Paul said he had in mind to produce a boot lid that was cut in half and opened just one side, thus alleviating the need to do this.

This is a car for someone who wants something totally different from the mainstream MGA contingent. I personally would request a quieter exhaust system as it may attract the boys in blue, but other than that I found it a really exciting car to drive and would love to have one in my garage.

We were both really excited about testing these cars and they fully lived up to our expectations. But, like Jekyll and Hyde, they had totally different characters. The Graduate is about power and noise and it gives this in bucketfuls and really finds your dark side when driving, whist the ‘standard’ car is a more sedate, mild-mannered car that you would be happy going to church in, but when the mood strikes you… the open road beckons.

Our thanks go to Paul Eales of Oselli Ltd for the loan of these cars. For more information on Oselli Ltd services and car sales, contact Paul on 01993 849610 or visit their premises at D2 & D3, Greenway Business Park, Great Horwood, Milton Keynes, MK17 0NY. 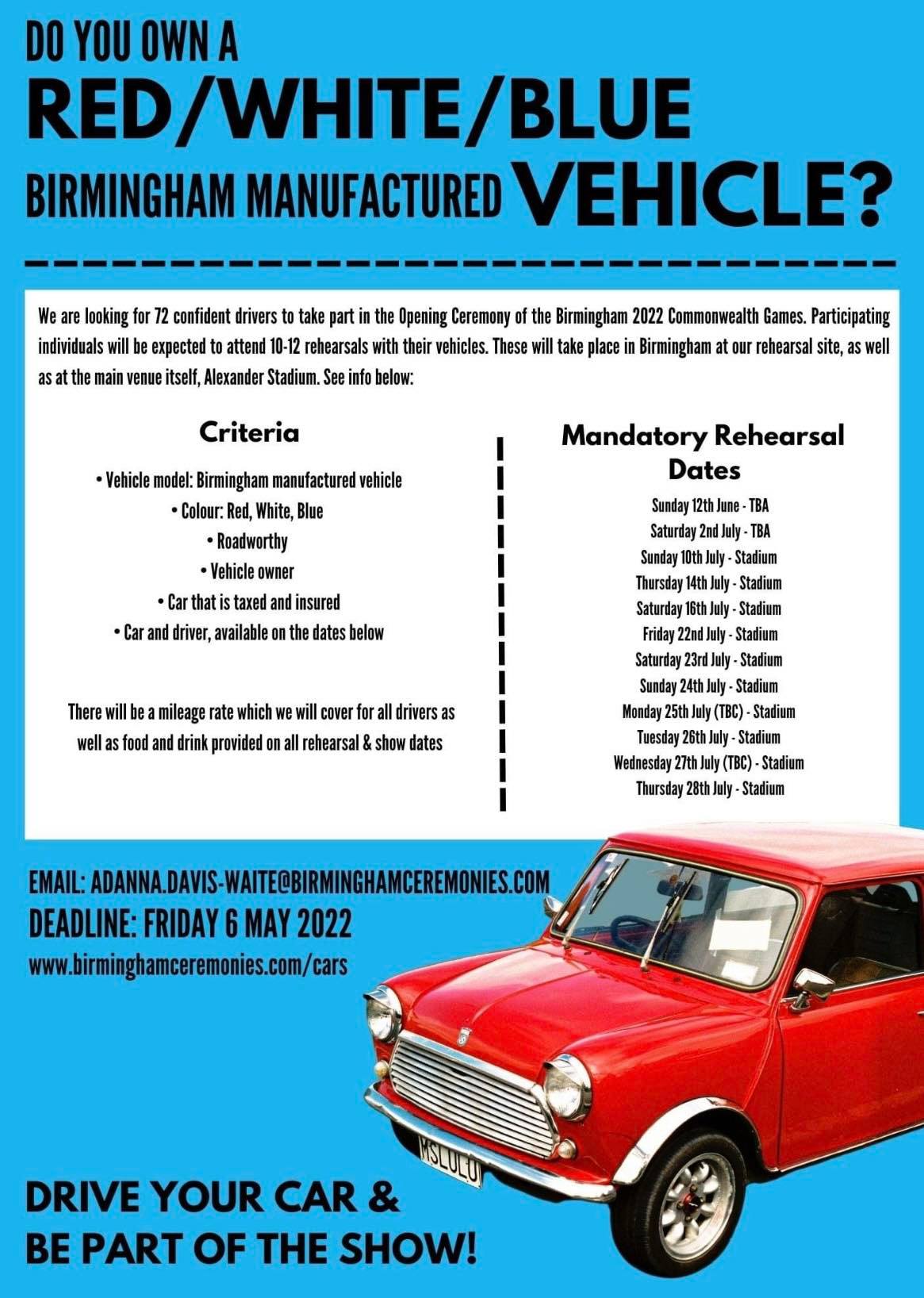