MG enthusiasts descended on Silverstone in their thousands from every corner of the globe to help celebrate 90 years of the MG marque at the MG90 event organised by The MG Car Club.

For this year, a change of name, an eye catching logo with an array of fresh features, including a 90 year timeline combined to tempt new faces to the home of British motorsport. 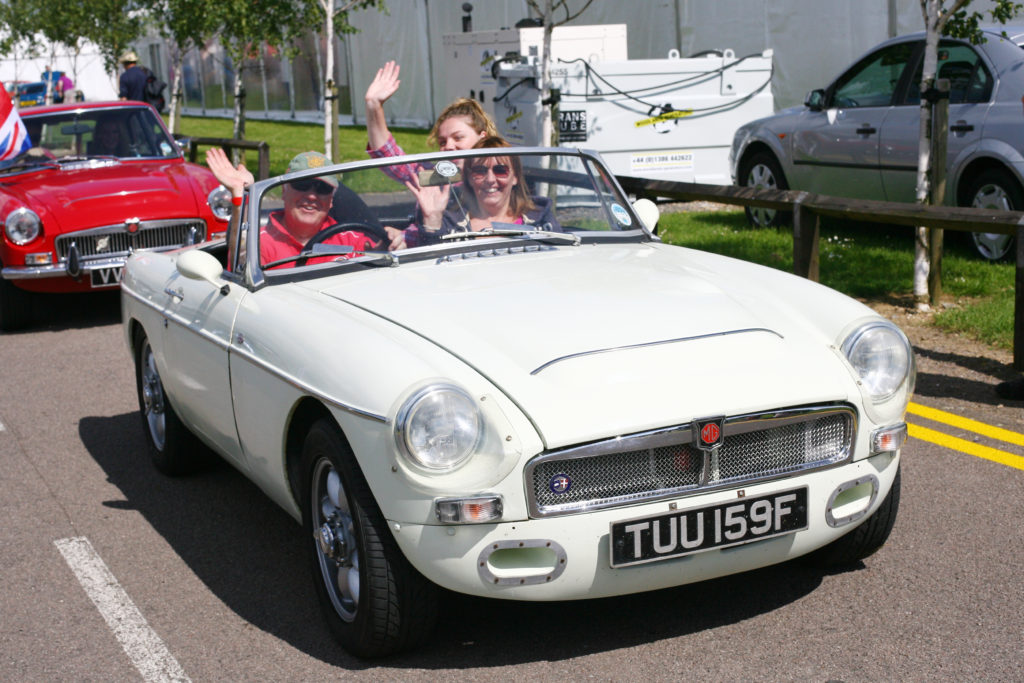 On entering the circuit on Saturday you were greeted by the sight of 100s of MGs bathed in glorious sunshine filling Silverstone infield. For many the impressive 90 year timeline was the highlight of the weekend, and the first port of call as it was adjacent to the main Register parking area. The display, organised by the Midget Register president Dennis Wharf, ran the whole length of Copse Runway and featured an example of most MG models, from the 1924 14/28 Super Sports of Chris Keevil and 1927 14/40 ‘Old Speckled Hen’ of Fred Body through to the very latest MG3 of Phill Jukes.

A number of other significant MG models were also on display and being raced over the weekend. In the main marquee Cecil Kimbers ‘Old Number One’, which was on loan from the British Motor Hertiage Museum, took centre stage on the Vintage Register stand. Each of the MGCC registers and Centres had space in the marquee to park one car on their themed stands, and cars such as the Jacques Coune Berlinette, that graced the MGB Register stand and the highly modified Dreadnought ZT 520 that was present on the Caledonian stand were admired by the constant flow of visitors all weekend. Located by each register car was a table which granted committee members space to display their wares and engage with enthusiasts who had flocked to the event, register flags stood tall above each model of car as the club marquee, traditionally a popular meeting point, assumed an enhanced identity. 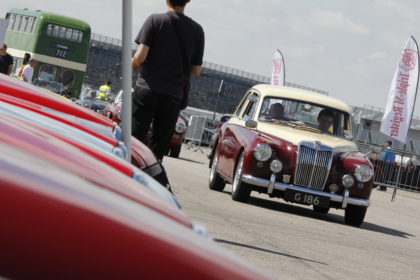 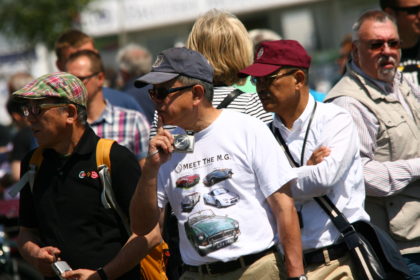 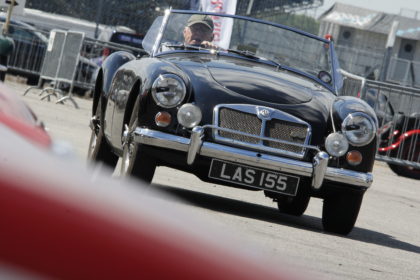 On track, the over 300 strong racing contingent got proceedings underway at a bleary eyed hour on the Saturday and spectators were treated to some very close racing trackside. The joy of being able to access the BRDC or Woodcote grandstand was a blessing for anyone with weary feet. The racing proved to be exciting and hugely competitive with many battles spreading down the entire field in virtually every race (see separate race report for more details).

Over on the Stowe Circuit MG Motor hosted the MG Experience, which provided an insight into the future of the marquee with several of the MG Dynamo electric cars on display, there was also the opportunity to watch MG BTCC drivers Jason Plate and Sam Tordoff take the new MG3 Trophy on the track. 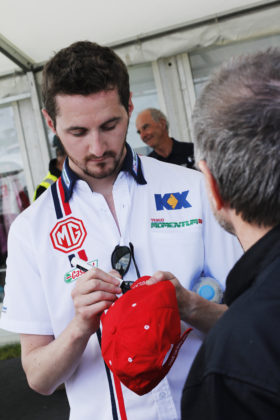 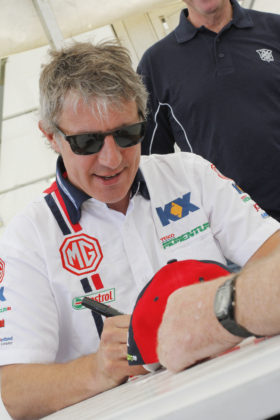 Representatives from Macmillan Cancer Support, the Clubs charity partner, arrived at the circuit early Saturday morning and took up their position in the Lifestyle Marquee with a stand by the MacMidget, and in various locations around the circuit selling the impressive and excellent value programme. Funds from each programme sale were donated to the charity and a steady stream of volunteers ensured the organisation had a good presence over the course of the weekend.

The stands in the lifestyle marquee were kept busy all weekend with those looking for something a bit different, like the specially made MG90 Chutney available from ‘Well Preserved’. Trade City was also bustling from the off, as bargain hunters wandered around sniffing out illusive parts. Saturday morning saw Frontline Developments unveil their new MG ‘Abingdon Edition’ dubbed the ultimate MG roadster on their stand which produced a lot of interest within Trade City. 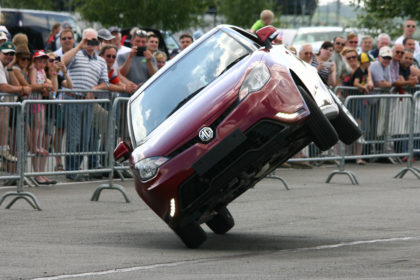 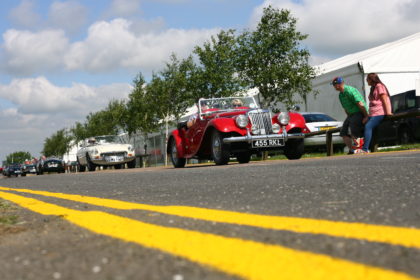 In the hugely capable commentating hands of mic man Graham Robson, the Arena officially opened in flamboyant style with the incredible Russ Swift generating oodles of smoke before thrilling passengers, who had kindly made a donation to Macmillan, by taking to two wheels in an MG3. Meanwhile, over in car park 49, the California Cup organised by the South West Centre was roaring into life with competitors, putting on a characteristically flamboyant display for the crowds that had made the journey across by foot or by one of the Free Classic Bus services that was available onsite.

Sure enough, back in the arena, a crowd gathered to see a selection of various trials cars from the ages, from MMMs to MGFs before witnessing the impressive mountain bike display of Savage Skills, the UK’s leading freestyle mountain bike stunt team and two unique modern MGs, a jet engined MGF and an MG TF with a Turbo, both evoked a wonderful reaction from the assembled audience. 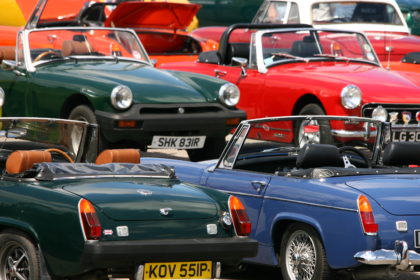 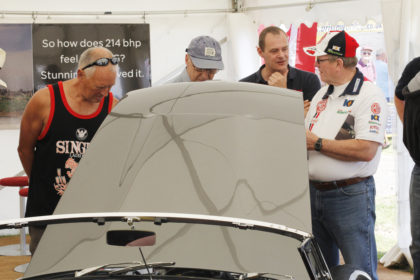 As lunchtime approached those who sought a more sedate Silverstone experience could be found sat by their cars, sandwich in hand enjoying a spot of early afternoon sunshine. The social marquee became a hive of activity as 90 overseas members gathered for a drink and a chat; the picnic benches outside the social marquee were soon full as well, with people taking advantage to enjoy the glorious weather. The V8 register marquee proved popular as always as did the static X-PAG special display which was located in the paddock area.

The rocker box racing, once again, proved popular with entrants from all over the globe racing their creations down the purpose built ramp. For those members that petrol ran through their veins, Saturday lunchtime saw the first set of Circuit tours participants sign on with the organisers the Tyne Tees Centre, before taking to the track. A host of MGs looked spectacular in assembly and glistened in the bright Silverstone sun. The Under 16 age group, admitted free to MG90, gleaned great pleasure from the circuit tour as they sat alongside mum, dad, grandma or grandpa and came face to face with the same corners that the F1 Grand Prix drivers would be facing a fortnight later. 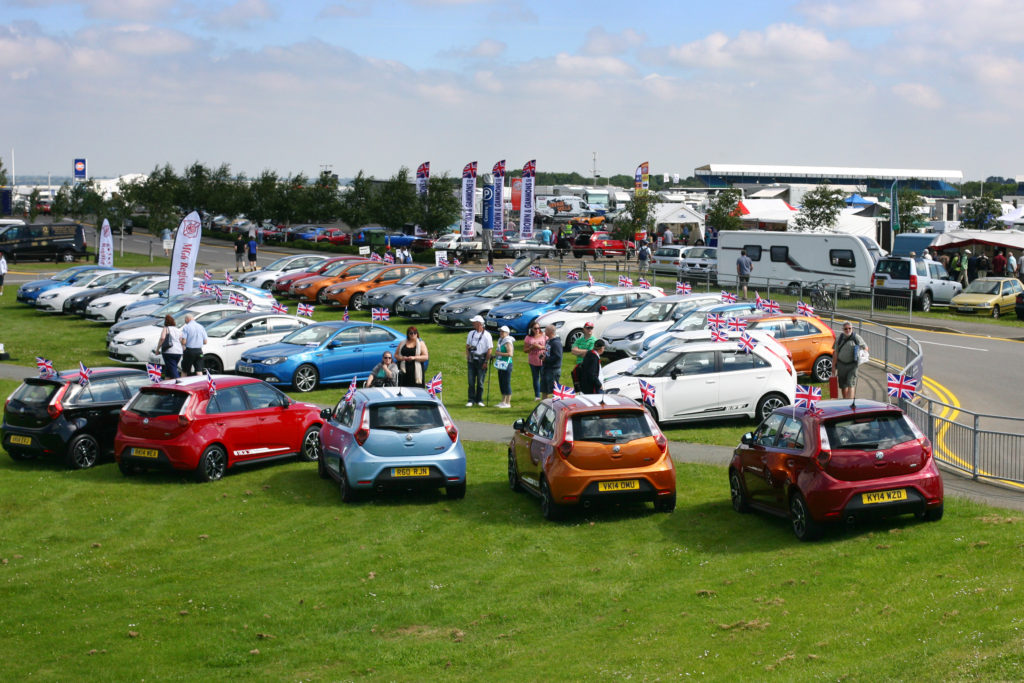 In amongst the gathered MG3s and MG6s in the MG 6.3.5 parking area were three MGs belonging to members of the MG Car Club China who had made the epic journey driving their MG3SW, MG5 and MG6 from Shanghai to Silverstone. An award to the intrepid Chinese crews was made in the arena during the afternoon. Another prestigious award was also presented in the arena during the afternoon, the California Cup. This was awarded to the Ulster Centre team, who gave the gathered crowds a demo of their award winning autotesting.

After the conclusion of the race schedule Saturday evening, the hard working marshals were enjoying a well deserved barbeque. The orange clad warriors, so vital to the racing programme, tucked into burgers and sipper beer as they reviewed the day of action.

Meanwhile others were more formerly dressed and headed by car or Classic Bus to the Silverstone Golf Club for the official MG90 dinner, with guest speaker Alec Poole. Presentations were also made to those who had worked tirelessly throughout the course of the year and heartfelt appreciation extended to all those who had made the event possible.

As the smell of BBQs wafted over the Silverstone circuit and an MG hot air balloon took to the skies, the now trademark Saturday night MGF Register organised ‘After Hours’ concluded the first day of MG90. With live music from Americana band ‘Case Hardin’ and leading Queen tribute act, Rock Q!, plenty of beer and some rip- roaring conversation. As darkness fell the attention switched to the incredible selection of Glo Cars assembled outside the social marquee, with their neon lights and lasers illuminating the ground and sky. 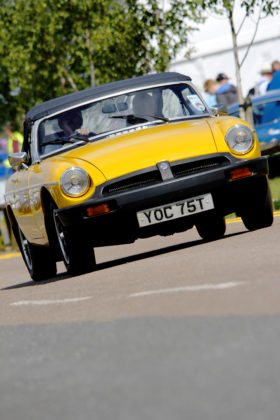 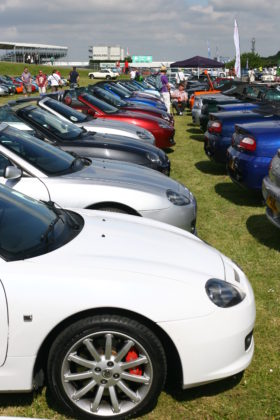 As Sunday dawned the blue sky and sunshine greeted Silverstone for the second day of MG90. Over at the Stowe Circuit, the final preparations were being made to ensure everything was ready for the Sprint, such a key feature of the MG90 weekend. As always the sprint was ran efficiently by the North West Centre, delivered great action and provided a platform for motorsport enthusiasts to ply their trade.

Cars began to assemble for the Concours and Pride of Ownership around 10am as the most detailed and immaculate examples of the marque moved gracefully to their judging areas. There were stunning examples of cars on show but the one that impressed the judges the most was the MG TF Spark of Dean Smith, who as well as winning his concours class was deservedly awarded Overall Best MG.

Russ Swift returned for four more session and Savage Skills gave three more excellent demonstrations. Both were greeted by more packed grandstands on Sunday. The racing was thrilling as ever, and those who participated in the lunch time circuit tour enjoyed their time on the GP circuit.

The main marquee was busy for a second successive day with the Centres, Registers and MGCC staff working hard to recruit new members and assists customers with their merchandise requirements.

People began to filter away from the circuit around six as the event drew to a natural conclusion. It has been a bumper weekend of action and those responsible for the organisation of MG90 will have no doubt been satisfied with the outcome of the event. The weather had been kind, the action plentiful and the sea of cars utterly spectacular. 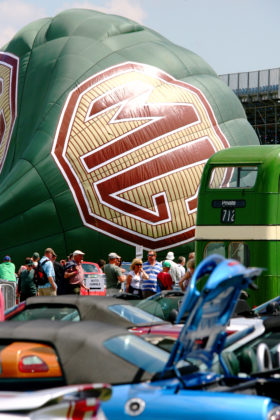 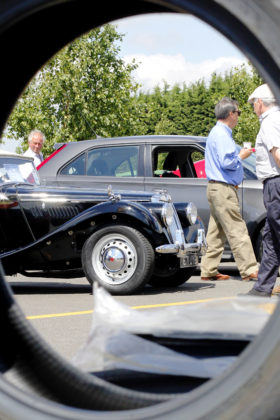 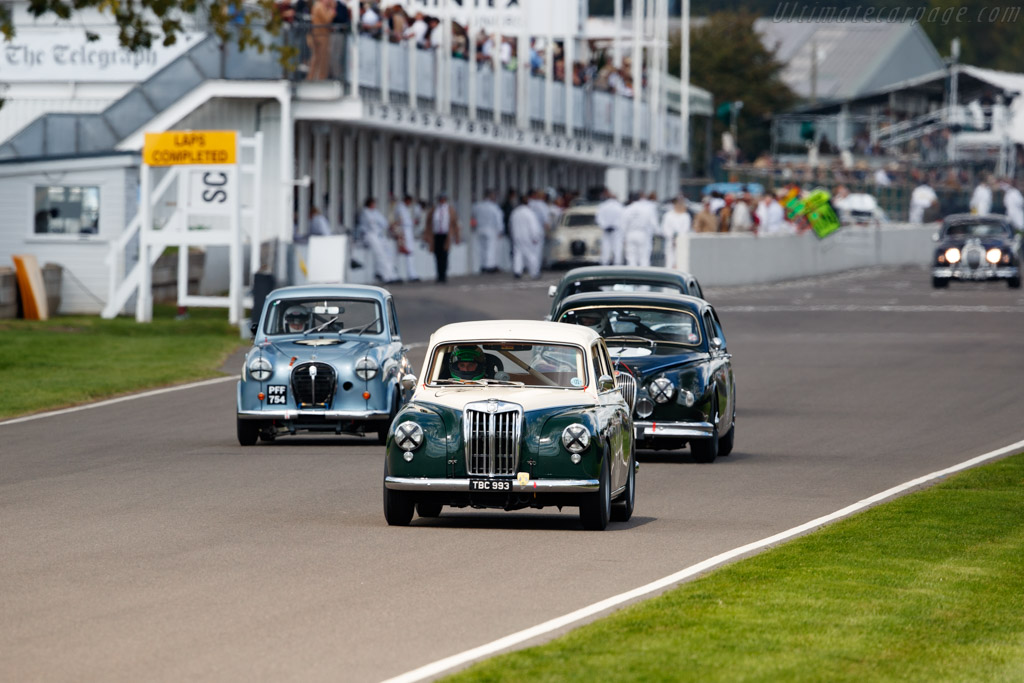