A wolf in Sheep’s clothing

I have owned D980 since 1989, which is just about long enough to get to know a car. I had recently arrived by motor yacht from Gibraltar and recovered my 850 Mini by road. This was ideal for Gib’s narrow roads but too small for the UK where motorways were faster and I had a growing family to cope with, so the Mini had to go. Living aboard in Brighton Marina, I saw this large white MG in Caffyn’s showroom. 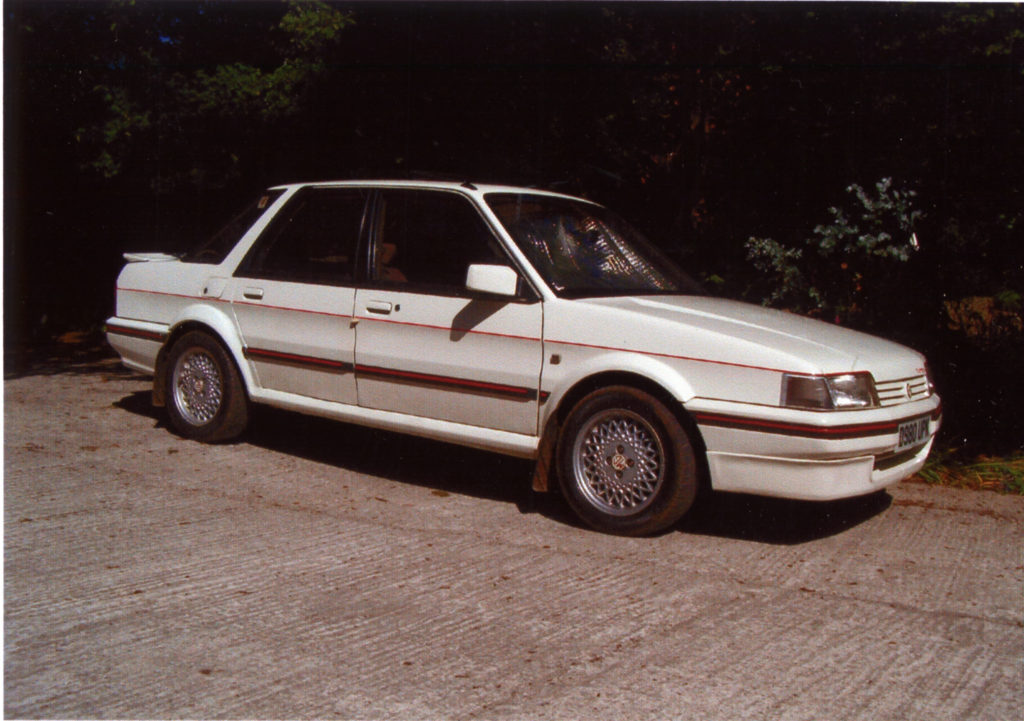 Enquiries revealed that it had been their demo car, was three years old, had 60,000 miles showing and yes they would take my Mini in part exchange for the £5,600 sale figure. Not quite the ridiculous to the sublime but nearly. A demonstration drive revealed a lot of horse power lurking under the bonnet; it was quite a rapid car. Just what I needed.

I had raced a J4 Replica on the early 1960s and it just about matched the performance though the turbo lag over the direct drive supercharger took a bit of getting used to. Passengers have since been quite alarmed when I have pulled out to pass something when they’re thinking ‘He’s never going to make it’, when suddenly at 3000rpm. wham! It’s there and the car literally takes off. Just as showroom sales propaganda of the time led one to believe. (Take off with a Turbo.)

0-60 takes just over 7 seconds and the top recorded speed on a track has been 140mph. Two speedometers have broken in a fancied attempt on the land speed record!

In Brighton I had again joined the MG Car Club after a lapse of about 20 years whilst I was running a crewed charter yacht in the Med. A few old friends from my days with the SE Centre emerged including Tim Binnington who ran the Show Shop at Abingdon and with whom I used to attend the Earls Court Motor Shows on the MG Stand. I lent the car to Tim to drive us down to his local boozer in Sussex when roles were changed and I was the one gripping my seat! 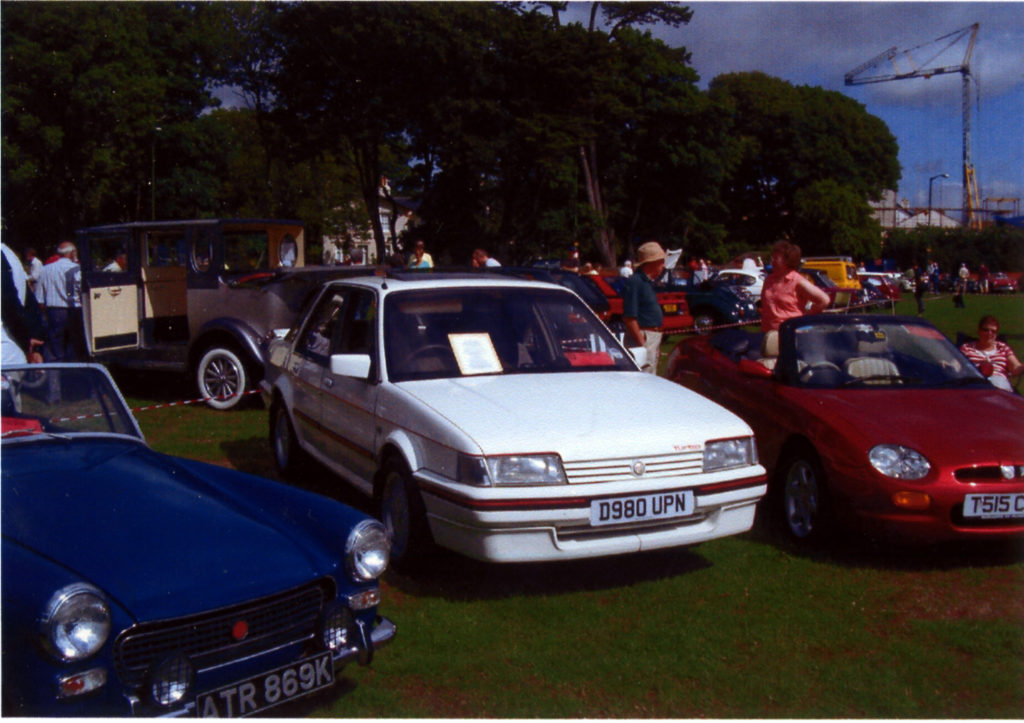 It wouldn’t be long before I moved down to Devon and joined the Devon & Cornwall Centre. Tamar Valley MG Centre in the shape of Alan Davis and Colin Bird were the ones who coped with any repairs I couldn’t manage. I made a point of changing the oil every 3,000 mile intervals using Castrol Magnatec. I had learnt from my racing days the value of frequent oil changes, particularly with a Turbo.

I have always been very careful how I start the engine, to let the oil get to the turbo before any throttle is used. I’ve always taken care to let the engine cool down as advised by Porsche, for three minutes before switching off. As the car has done over 215,000 miles on the original engine and turbo, it has all paid off. It is even quieter on start up than my two litre SAAB which has only done 80,000.

As regards component failure, the radiator was first to go, I am now on my third. The final drive bearing cage collapsed in the Honda gearbox, so that was a complete re build with new bearings all round. The clutch has been replaced once. The cylinder head has been off to replace a blown exhaust manifold gasket. No wear was discernible on the pistons. I fitted hard rubber suspension bushes as an oil leak from the engine decayed the soft rubber, but the hard bushes provide positive steering. 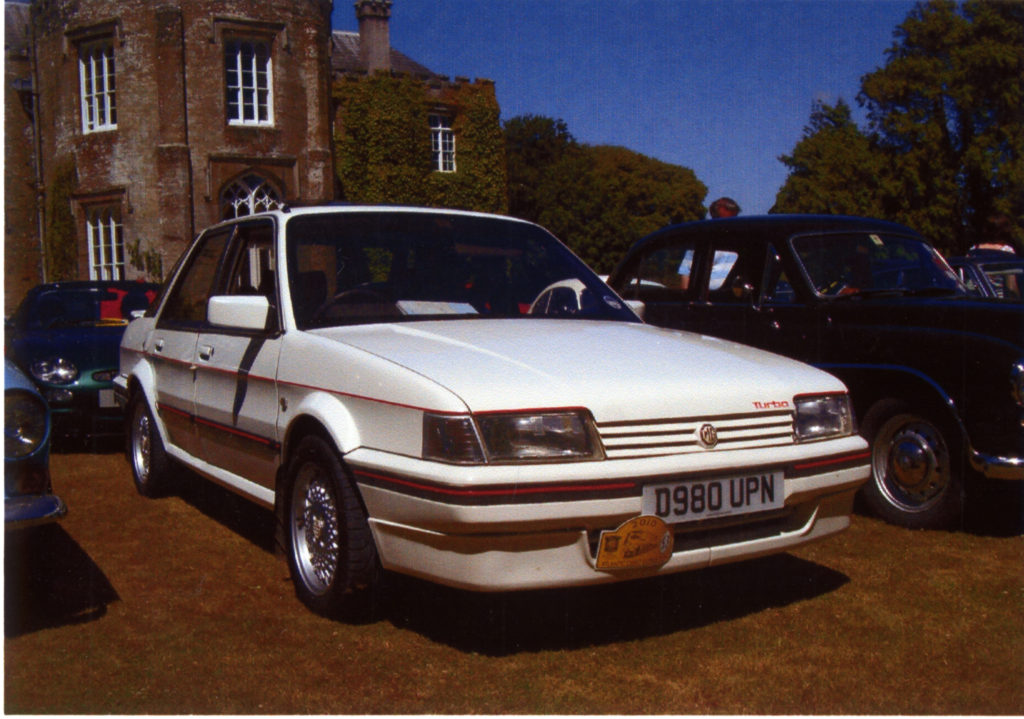 Two sets of front discs and two modified front wheel bearings have been replaced. I soon learnt not to storm into roundabouts hoping the way would be clear, to find I would have to brake heavily to a standstill at the last minute as the heat transfer through the hub dried out the bearings. Kevlar pads allow a better wear rate to the discs. I am now on my third alternator as the last one cooked the battery and the AA replaced this on my departure from Branscombe rally in Devon.

The road wheels, originally of Italian manufacture and taking only metric tyres, I changed when the covers reached £150, each. Now the car is on the Mk2 alloys, provided by Motobuild, spoked and very attractive to look at.

These allow for a larger diameter and lower profile tyre than the original. I saved the MG logo from the original wheels and engineered it into the centres of the new ones. The car is currently running on Pirelli 6000 all round.

As regards rust, well! I have been attacking it constantly since 1989. But I’m winning. Tamar Valley came to the rescue with major surgery when the sills needed replacing together with rear wheel arches, door post ends and some carefully crafted filler plates connecting the sill ends to the arches, provided by welding magician Colin Bird. 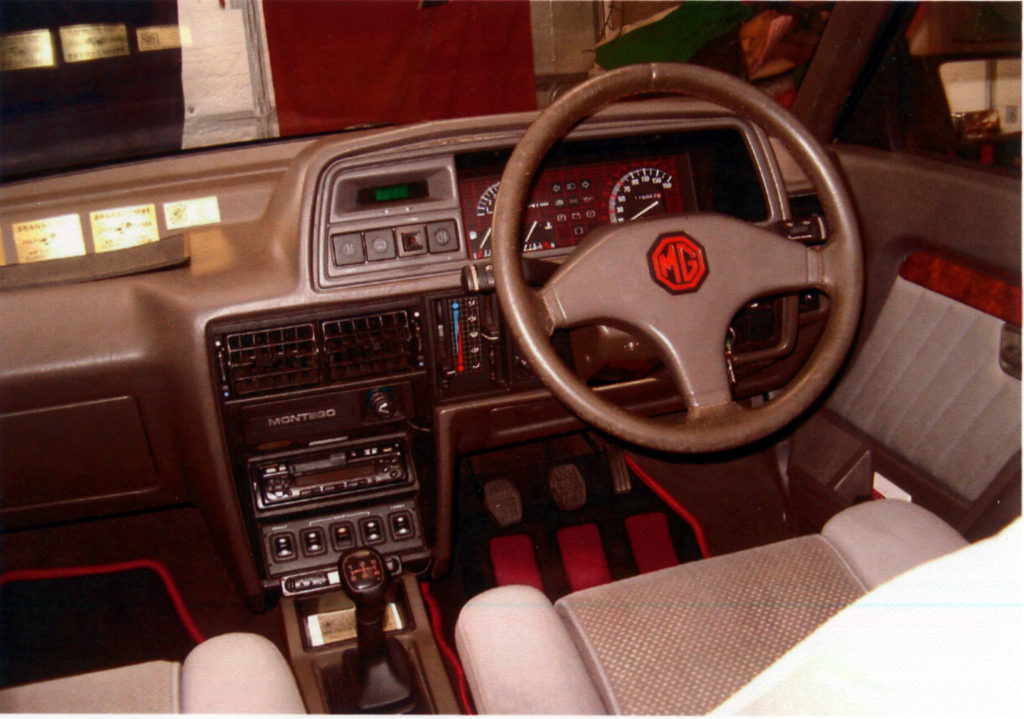 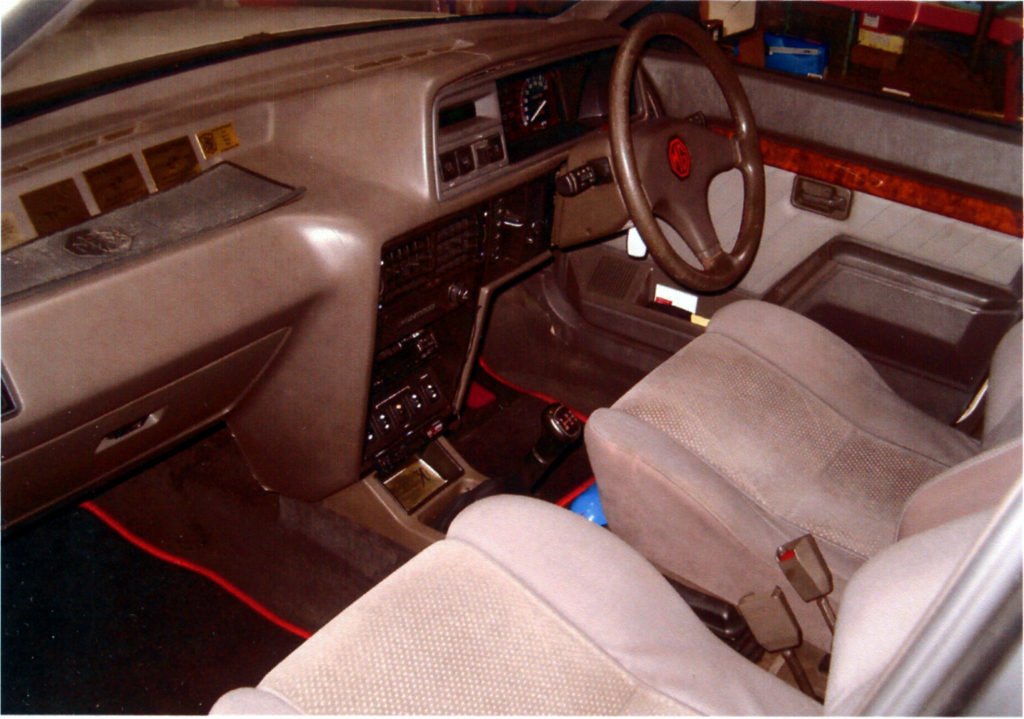 A replacement new power steering pump and new track rod ends are some of the latest additions. The steering is a delight as it is fairly high ratio, allowing quick recovery in a skid. The car is totally well balanced in corners and completely predictable. Once one has got used to torque steer, I have found I can throw it around just like a Mini.

But like the Twin Cams I drove on rallies with University Motors it is a complete wolf in sheep’s clothing. An arrogant Sierra Cosworth driver with blacked out windows once cut me up at some traffic lights in Brighton, and learnt a lesson as I stayed glued to his tail for the next three light interchanges and away. I like to think he took it back to Cosworth’s complaining that he had been passed by a Montego!

Somewhere around the 100,000 mile mark I acquired a spare engine/gearbox and turbo as I thought it would never last. It has and the spare engine still sits in a corner of the garage being turned over at intervals.

I discovered a wiring loom for the manual sunroof originally fitted when the head lining was off, so took the opportunity of fitting a Rover glass electric roof. This matches the rest of the car which has electric windows to all doors and electric, heated mirrors. Quite early for a 1983 design.

The roof lining itself has since been replaced as it dropped giving rear seat passengers a sort of shroud which didn’t make them look at all elegant. I have also fitted Vanden Plas door panels which are entirely in keeping with a sports saloon which, I think, should have been badged as Magnette. 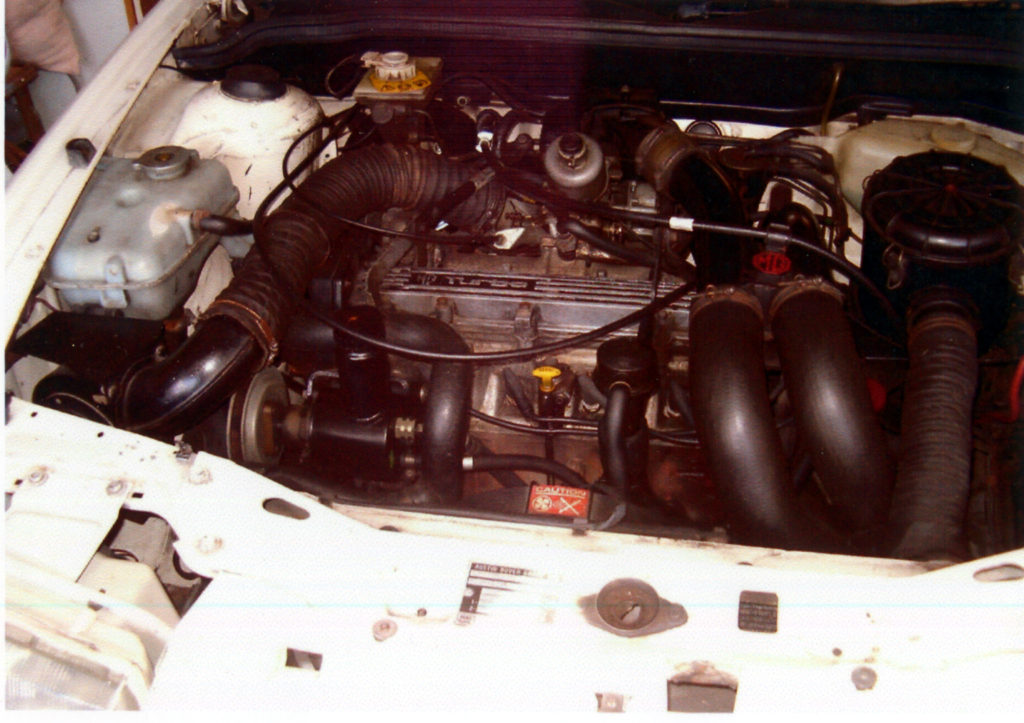 An interesting mod to lower the suspension all round by nearly two inches resulted in some very rapid motoring and a friend remarked that it cornered like a rat on a roller skate! It did not, however, survive the local speed bumps which cracked the sump so it was a good opportunity to take the sump off for welding and test big end bearing play. There wasn’t any. It is now back on standard suspension.

Whilst investigating a lot of slack in the wipers, I had to take the bonnet off to release the scuttle plate. The bonnet is very heavy and being an ex sailor, I managed to devise a way with ropes and tackles to suspend it from the garage roof. The local MG Agent at the time wanted to see the car with a view of supplying parts for the wiper bushes.

I looked at the bonnet intricately suspended from the roof and decided to take the chance of driving from Ilminster to Yeovil without it. Well it was a fine day and not likely to rain. Quite a few pedestrians gave me some odd looks, had I forgotten something? All was well and the bonnet lowered safely into its correct position without mishap.

Technically, one curious fact is that the Turbo engine is using a single SU carburettor, which has a complicated crankcase breather piping assembly. Why this was preferred over a fuel injection system (which already existed with the MG Montego 2 litre EFI) I can’t understand. It does work very well, though the electric choke using a stepper motor sometimes goes to sleep. 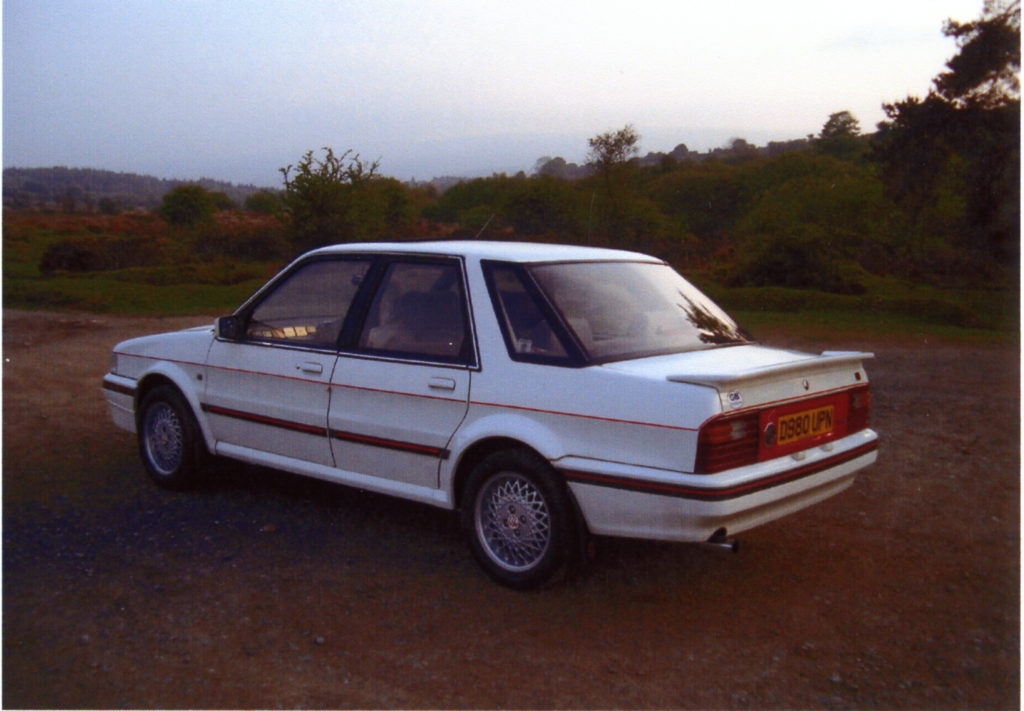 It has been necessary to provide a cooling fan, accessing air from outside the engine compartment, which blows cold air onto the carburettor for 12 minutes after shut down, to avoid the possibility of air locks in the fuel supply as the carburettor is sitting on top of the turbo and subject to the rise of latent heat.

There is an intercooler at the front. The carburettor and the turbo are at the back of the engine, so there is an array of large pipes taking the engine charge from the back to the front and return, plus the carburettor cooling pipe. Whilst attending an event with the bonnet open, a nurse from the local hospital observed that I had enough pipes to run a sewage system! Well, they would know.

I was on the Club Stand at Paignton Sea Front in 2011 when I was excitingly greeted by a man who said he had built the car at Longbridge in 1986. He told me several tit bits about how they were built. “You’ve made my day, mate!” he said. Apparently the production line was cleared once a week of ordinary Montegos whilst they had an MG day and built 18, EFIs and Turbos.

I believe the entire production of the Turbos was something a little over 5,000. Today, I’m told, there are only three left on the road with a possible 11 not taxed. So it has become something of a rarity. I’m very cautious about driving on the road and have taken to obeying all the speed limits and have eyes everywhere for accidents.

I have many people come to me on Club events to admire the car which seems to me to be fairly ordinary to look at and definitely not as attractive as the usual predecessors built at Abingdon. It is, however, a bit of MG history in its own right and fulfils the original role of MGs to provide cheap performance. 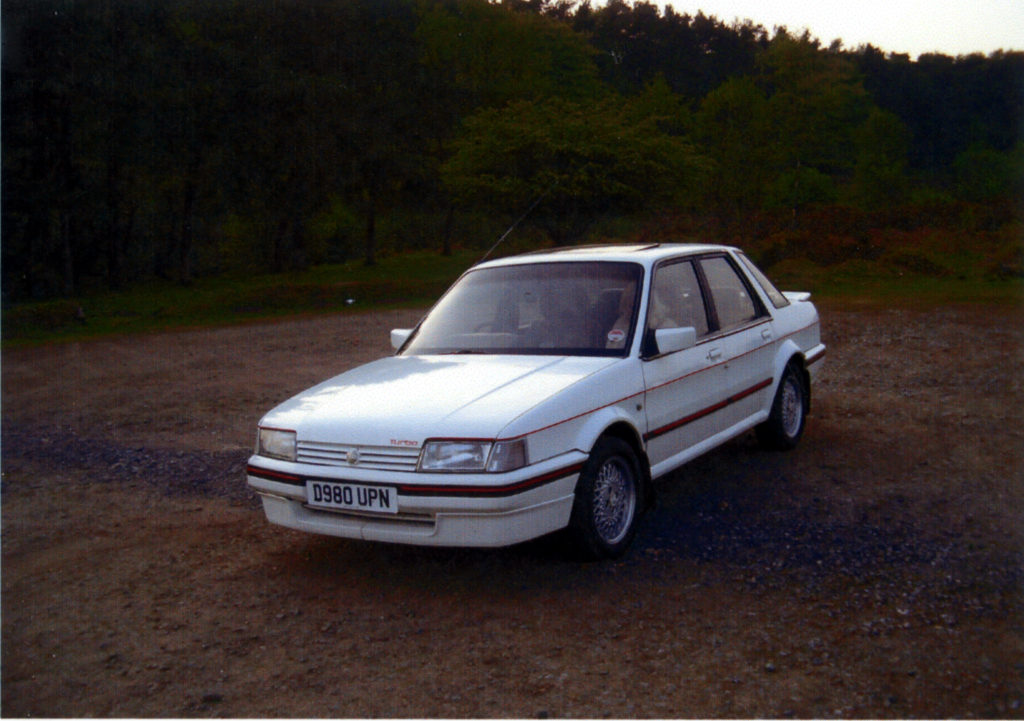 In my ownership the car has been entered for 35 Touring Assemblies with the local Devon & Cornwall Centre and 30 static show events; has been to Donington for the 40th Anniversary of the MGB, entered for a concours and to the Roebuck Inn at for the 60th Anniversary of the formation of the MG Car Club when John Thornley was present who happily recognised me from the ‘old days’ when I was Wholesale Manager for MGs, at University Motors, London.

I have taken it onto the Continent, down to Carcassonne via the Roscoff ferry and a couple of visits to Brittany. It doesn’t mind driving on the right for a change. So it’s had a good showing and has proved largely reliable and certainly fun to drive.

Now D980 is only taxed for the summer months allowing my wife and me to attend several events, even in the rain, though it takes me ages to clean the wheel arches, apart from the car. So the SAAB takes the strain, whilst the MG enjoys a quieter life than it has previously been used to.