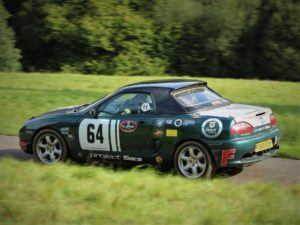 About the Speed Championship

The MG Car Club Speed Championship, for sprints and hillclimbs, proudly enters its 33rd season in 2021. Organised by the MGCC North West Centre, the Speed Championship provides Club members access to relatively low cost competitive motorsport, by providing classes for all models of MG (and AH Sprites), from standard to highly modified. With the emphasis on friendly competition, we hope to encourage more Club members into affordable motorsport.

All drivers compete for the National Championship, for which points are gained at any venue, irrespective of its geographical location. Competitors nominate a ‘Home’ region, North or South, and may count up to six ‘Home’ results towards that Region’s Championship. For the National Championship, drivers may count up to eight results, which must include at least two from your ‘Away’ Region. Joint North and South events qualify as ‘Away’. Championship awards are presented at the annual North West and South West Centre Dinners.

News and views are shared via the MG Car Club Speed Championship Facebook group. It’s a great place to catch up on the latest news and resolve any questions or queries you may have regarding the Championship.

Motorsport UK have granted a Championship Permit. As a...

We are pleased to advise that entries for the...

If you’ve ever wondered what Speed Events are all...