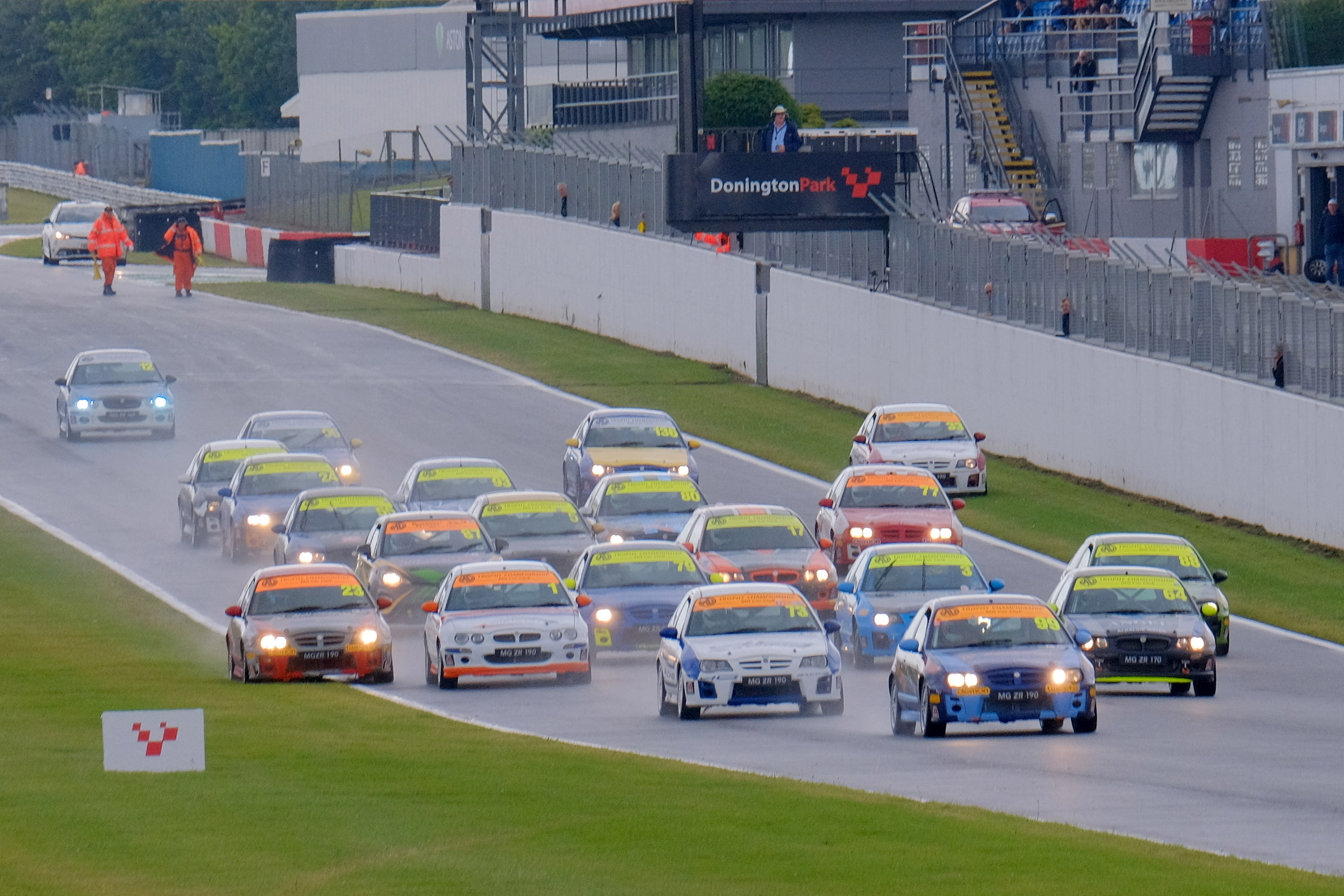 With the resting of MG Live! for 2019 there had been a twelve week gap since the first two races of the Championship. As has previously been mentioned Championship registrations are significantly down on last year’s figure with a total of 28. It was thus pleasing to have 24 entries for Donington, the Class breakdown being 7 Class A, 13 Class B, 3 Class C, and for the first time 1 MG3 190.

A very welcome return to the Trophy was made by Colin Roberston (No.87), who brought his MG3 down from Perth for its first run in the MG Trophy. The car has been built by Colin with help from Doug Cole on custom parts (mainly suspension) using his previous MG ZR 190 engine. Considerable weight ‘saving’ has been done but the car is still 90 kgs heavier than a ZR. To make this car competitive in class A, where it grids amongst the other slick shod MG ZR, Colin is talking to Mark Stacey (K maps) re an ECU re map to give more power. Colin has gone down the existing K series VHPD route, but the championship regulations allow for 3 engine options up to 220 bhp. The first outing of this car was in the Cockshoot race at Oulton Park last year where it came 3rd.

New to the Championship for this year is Fred Burgess (No.17) in Class B. Fred is the son of last years overall Runner up Jason Burgess (No.16) and will be campaigning in Phil Tomlinson’s car, while Phil takes a year out.

Also returning for their first 2019 outing were two drivers in Class B, Gianni Picone (No.5) and Matt Turnbull (No.64). Making a welcome return to Class C after two years out was Martin Webber (No.12)

Rounds three and four of the 2019 Championship were sponsored by Vehicle Procurement Ltd. Our thanks go to Malcolm, Mark and all the staff at their Nottingham base.

Many of the grid made use of the Friday MSV testing option. Of particular note was John Booth (No.50) Class B, who managed a gentle roll on to his roof, and starting a trend of what was to be a busy weekend for many. Friday evening the car returned to the 4G Spalding base and received the attention required from Ali and the team to make it ready for Saturday.

With the luxury of a two-day meeting the Trophy 15 minute qualifying began at 09:45, with the days somewhat unpredictable weather conditions currently dry. As the session reached its mid point the order in each class was A Makar, Ross, Booth, B  Kirkpatrick, Luti, Turnbull, C Croker, Bacon, Martin. Three laps later, Cole had replaced Booth for third in Class A, and Turnbull had taken second from Luti in Class B. Next Harris pulled off, and then Luti’s engine expired which marked the start of a chain of events which would see a couple of engine builds and his missing of that days race. With a minute and a half of the session remaining the only change in order was to see Jackson take third in Class B from Luti. This order was unchanged at the session end, the six running Class A cars, followed by Robertson’s MG3 in seventh and then the leading Class B car. Grids for the races were again formed in Class order, although this only really benefitted Harris and Dalgarno. Round 4 grid was based on second best lap times, the only top three difference from Round 3 being Burgess third in Class B.

As the time for the race approached the weather had declined to cloudy, but still dry. Missing from the grid was Luti, still dealing with the expired engine from qualifying. Eight minutes into the race, with signs of the beginning of some rain, Harris experienced a brake issue at the Old Hairpin and on re-joining made contact with Marsh. This left Marsh upside down in the gravel, and brought out a Red Flag before the rain really set in. So began the third gigantic support effort of the weekend, which would see Marsh also return for the following days race. With the heavily deteriorated weather situation, and the cars held on the grid with their dry setup, Race Control made the decision to hold the remaining part of the race later in the day.

21 cars made the restart an hour and a half later, in what were now definitely wet conditions.

Reigning champion Graham Ross made it three MG Trophy wins from four this year by claiming both Donington victories. He prevailed in wet-but-drying race one – held over two parts due to a red flag – with a last lap outside-to-inside pass of Doug Cole through the Craner Curves.

“I am pleased, considering this weekend has been a bit experimental,” Ross said, referring to a modified VVC head he was running for the first time, “but the wee thing has gone absolutely great. I can tick the box and say that one’s a success. I like Donington, it’s not one of these ones where I come with a negative attitude.”

Cole got two second places from Donington, despite his gears jumping out in the second race, which let Ross past him at the Old Hairpin. “That’s not an excuse, we should prepare them a bit better,” Cole admitted. “I think I could have kept up with him if it’d been OK.”

Double poleman Ross Makar had a frustrating time, as he dropped out of both races with blown head gaskets, which he suspected was due to gas getting into the engine and causing its water to overheat. Makar and Ross made contact at Redgate in race two as Ross went by shortly before Makar dropped out; though both drivers accepted there was nothing malicious in it.

Matthew Turnbull was Class B victor in both races, and got Driver of the Race as well as Saturday’s Driver of the Day for his race one effort, where he finished third overall just 3.6s off Ross. He got the race two class win as well after Sam Kirkpatrick, who was holding Turnbull off, had a late-race engine blow up, ironically at almost exactly the same point of the track that he had a similar blow up in last year’s Donington meeting. Kirkpatrick fell down in race one when he ran off at Coppice in wet conditions, not quite able to correct a slide. Adam Jackson was race two’s Class B runner-up and got Driver of the Race. Joshua Bacon and Paul Croker split the Class C wins, after a broken throttle cable left Bacon stranded in the Assembly area for race 2.

Driver of the Day – Matthew Turnbull 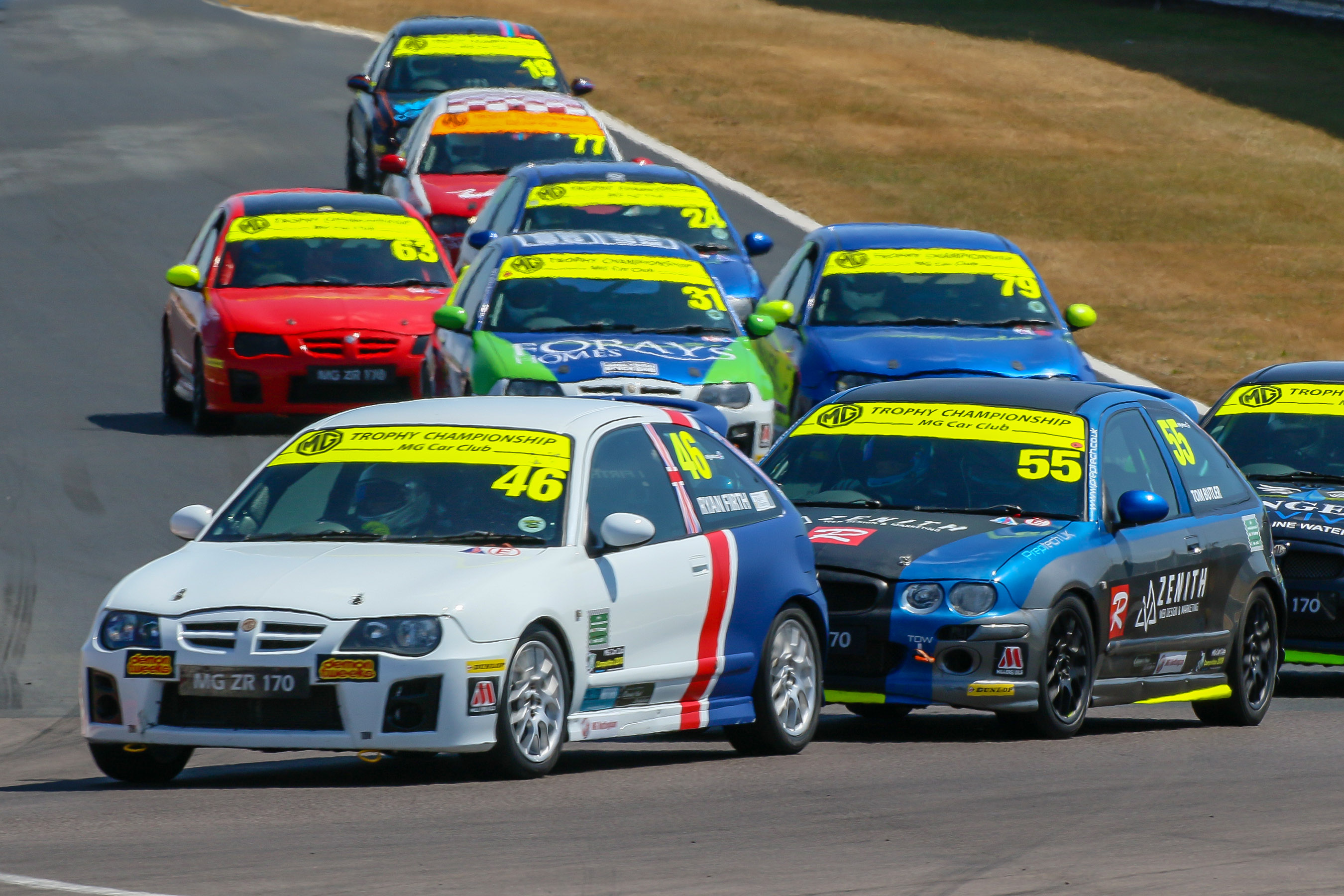 The inaugural British Sports Car Weekend, a new initiative jointly run by the MG Car Club and the Morgan Sports Car Club, was a chance for MG Racing to move from the traditional race meeting format and try a few new concepts in order to build an event packed full of FUN for wider appeal.

Early indications suggested a grid of 32, but work and family commitments (and the inevitability of not being able to stretch time!) finally reduced this to a still healthy 29, the Class breakdown being 6 Class A, 18 Class B and 5 Class C.

Some unfortunate planning by my cousin, who has performed start line duties in Orange for MGCC in the past, resulted in Best Man duties for me, which consequently delayed my attendance at Donington until Sunday. All reports I have had, and media I have seen, about the Saturday Grid Walk have been very positive, with one or two notable ‘outstanding’ team performances. Well done to all who entered into the spirit of a FUN event.

Returning to the MG Trophy Championship at Donington, his local circuit, after the disappointment of a round three crash at Brands Hatch which wrote his car off was Andy Firth. The new car was built with the assistance of son Ryan (No. 46) and fellow competitor Simon Byrne.

Rounds seven and eight of the Championship were sponsored by MG Nottingham. MG Nottingham are a family-based dealer from the Mapperley area on the north side of the city. They are the first MG dealer to respond to a sponsorship request in over four years, and the MG Trophy is really proud to be associated with them. The team is led by Malcolm Ledgar and Mark Campbell, and ably assisted by Chris Lacey. Car sales are handled by Mollie & Jessica Clark, and Nicola Ledgar.

The Trophy cars were second out on track for their qualifying session at 09.28. After 2 laps the leaders were Turnbull, Butler, Roberts and Kirkpatrick. The first 190 was Payne followed by Walker, Cole and Ross. In class C the order was Booth, Gill, Heasman and Dalgarno.

Spencer had rear bumper problems and was given the black and orange flag to call into the pits. There was a problem removing the loose bumper which lost him considerable time.

After 5 laps the order was Ross, Burgess, Payne, Cole and Walker. The class B front runners were Luti, Kirkpatrick, Turnbull, Butler and Roberts. Class C was led by Booth, Ballard with Dalgarno and Heasman next in line.

With 5 minutes remaining Burgess led from Ross with Cole, Payne and Walker next up. Class B was as before with Luti leading from Kirkpatrick, Turnbull and Butler and Booth, Ballard, Dalgarno and Heasman in class C.

The session was red flagged at 09.39 due to oil on the track at Coppice following Kirkpatrick’s blow up which sent 5 cars spinning off. Due to his lost time Spencer was unable to post a fast lap and ended up in P27.

In the opening MG Nottingham MG Trophy race Graham Ross claimed his fourth win in a row, just beating Jason Burgess who returned to action after missing Silverstone. Burgess led from pole but Ross seized the lead at half distance by getting up the inside at Redgate. Burgess stayed on his tail for the rest of the way and Ross won by half a second. Doug Cole finished third despite a Redgate spin on oil from two earlier blow ups as well as gearbox struggles.

Paul Luti kept championship pace with Ross by taking race one Class B victory, winning out in a fight with Tom Butler and Driver of the Race Sam Kirkpatrick – whose team changed his engine to an old unit in double-quick time after a qualifying blow up due to Kirkpatrick selecting the wrong gear, also several cars went off on his oil. In reality Luti’s win was comfortable as both Butler and Kirkpatrick got time penalties for track limits – Butler had five seconds added and Kirkpatrick 15 seconds for two offences. Tylor Ballard meanwhile made it three Class C wins in a row.

Driver of the Race – Sam Kirkpatrick

Ross made it five wins on the trot by winning the second race too, again from Burgess. It was more comfortable than race one as Burgess had to ease off to cool his brakes at mid-distance after a spell of pushing them hard trying to force leader Ross into an error. Ross also got to the top of the championship table as Luti slid off at McLeans trying to take the Class B lead from Fitzpatrick on the outside, and got beached in the gravel. Kirkpatrick helped himself to the class win ahead of Ryan Firth and Driver of the Race Butler, while Ballard extended his Class C winning run to four.

“I’m chuffed as chuffed can be,” said Ross afterwards. “Jason kept me really honest. Then I seemed to be able to eke out a wee bit; then it was just a case of not doing anything silly.”

Driver of the Race – Tom Butler THE TROPHY season kicked off at Donington Park for the second year running but with a slight twist. END_OF_DOCUMENT_TOKEN_TO_BE_REPLACED