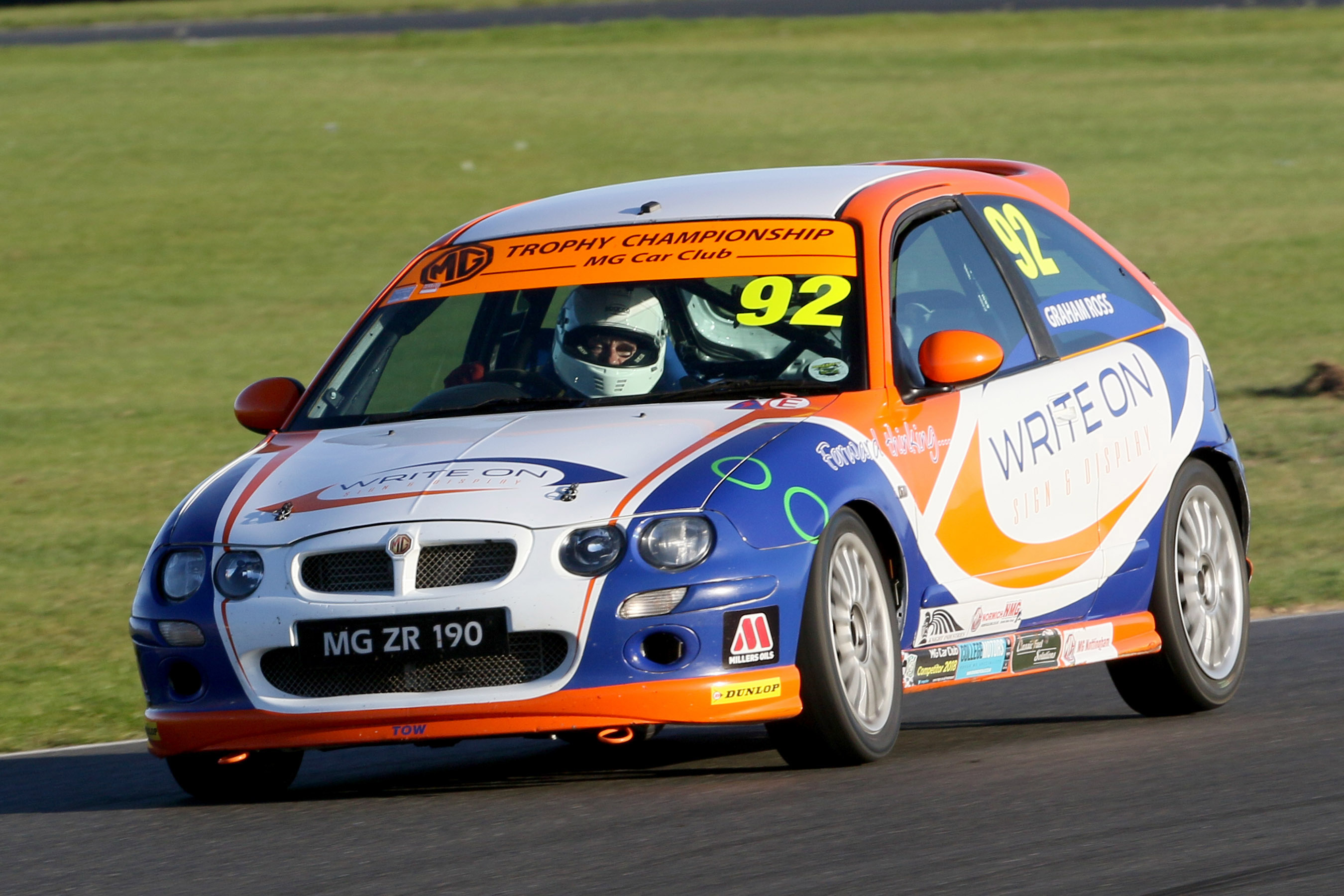 The final two championship rounds again followed the tradition of the Norfolk Snetterton Circuit venue, but for the first time this year took place on the longer 300 layout. The outcome of all three race classes would depend upon the Snetterton results, the first to second place points gaps in each class being A: 9, B: 6, and C: 4. With all still to play for at the closing date there were 28 entries, the Class breakdown being 7 Class A, 16 Class B and 5 Class C.

The final two rounds were the first of the year for two long time Trophy supporters Fergus Campbell (No.131) and Simon Byrne (No.4), both competing in Class B. Switching to Class A was Paul Luti (No.69).

Rounds eleven and twelve of the Championship were sponsored by the Norfolk Motor Group (NMG) of Norwich. NMG are a new MG dealer for 2018. Sales Manager Craig Durrant arranged the use of the MG Motor UK event trailer and together with the NMG team was able to display the current MG Motor range at Murray’s corner.

With only a few having experience of the 300 circuit the Friday MSV testing option was very popular with Trophy drivers. I noted 25 cars making use of the track time. The news of Paul Luti’s decision to leave the season long brake issues of his Class B car behind him and give Chris Bray’s Class A car a proving run had been kept under tight control until now. Towards the end of testing I became aware of a very late Class A entry taking the Class total to 8, by far the largest for the year, and hopefully an encouraging sign for 2019.

Not being scheduled as race one made for a more relaxed start to a dry and bright day with the Trophy taking to the track at 09:58 for their 20 minute qualifying. Time keeping were only instructed to remove one lap time for exceeding track limits. After 4 laps the leaders were Makar(A), Luti(A), Kirkpatrick(B), Ross(A), Firth(B), and sixth Marsh(B). In class C the order was Booth, Bacon, and Ballard. Two laps later and it was Ross(A), Luti(A), Burgess(A), Makar(A), Turnbull(B), Cole(A), Kirkpatrick(B), and eighth Firth(B). Class C still Booth, Bacon, Ballard.

As the chequered flag fell the final order was A: Ross, Luti, Burgess, Cole. B: Turnbull, Kirkpatrick, R Firth. C: Booth, Ballard, Bacon. Second best times were the same order for Class A and Class B, but for Class C: Booth, Bacon, Ballard.

The destination of the MG Trophy, supported for the event by Norfolk Motor Group, went right down to the wire, but Graham Ross emerged on top from a weekend that did not quite follow his plan. He did qualify on pole position, and was joined on the front row by Paul Luti – who appeared not in his regular Class B car but in past champion Chris Bray’s ZR 190.

Having changed the clutch after qualifying to a more standard part, Luti made a terrible start to the opening race, with Jason Burgess storming through from row two to lead. Luti climbed back to third before a safety car period, then lost out to Ross Makar at Riches at the restart, before the latter went straight on at Agostini. A lap later, the seventh, Luti made contact with Ross at Wilson hairpin and grabbed second, before Ross spun down the order at Hamilton – although importantly he remained third in Class A, and eventually regained that position on the road. Up front, Burgess defeated Luti by 0.7s to also pick up Driver of the Race.

In a typically crazy Class B race, Ryan Firth came out on top although Sam Kirkpatrick had been ahead almost race-long. “He just pulled off under the bridge, I don’t know if he missed a gear or what,” mused the beneficiary. Matt Turnbull and Tom Butler completed the podium, while the two leading Class C contenders both failed to finish. Tylor Ballard was ruled out when startline contact left a wheel hanging off, while John Booth’s engine blew on the final lap. Guest Joshua Bacon triumphed from Joe Dalgarno.

Driver of the Race – Jason Burgess

The Class points gaps, first to second, at this stage were A:Ross lead Burgess by 7. B:Firth lead Turnbull by 18 (but with 12 points guaranteed from his drop score now uncatchable). C:Booth lead Ballard by 5.

The second race was, by and large, a relatively sedate affair. Burgess again scorched into the lead, but this time threw it all away with a spin at Hamilton on lap two, salvaging only fourth position. That left Luti out front, having taken track position from Ross at Oggies on the opening lap. Ross, meanwhile, did all that he needed and stroked the car (which he reckoned was understeering after the race one incident) home in second, ahead of Makar. “I’ve been doing this since 2008, so I am in my 11th year but never really had a concerted effort on the championship,” said Ross, having wrapped things up. “I am not in the first flush of youth so I am really chuffed!”

After Kirkpatrick went off at the first corner, Firth initially led in the ZR 170 division but was passed by Turnbull at Wilson on the second lap. Turnbull was handed a bit of a cushion when Burgess slotted in behind him after his spin, and Firth was unable to chase him down – but had already wrapped up the Class B title. While Turnbull took his first class win of the year, Fergus Campbell was an excellent third and claimed Driver of the Race. In Class C, Ballard and Booth (following an engine change) slugged it out for the title but although young Ballard won on the road, Booth did enough to take the class crown by 3 points.

Driver of the Race – Fergus Campbell