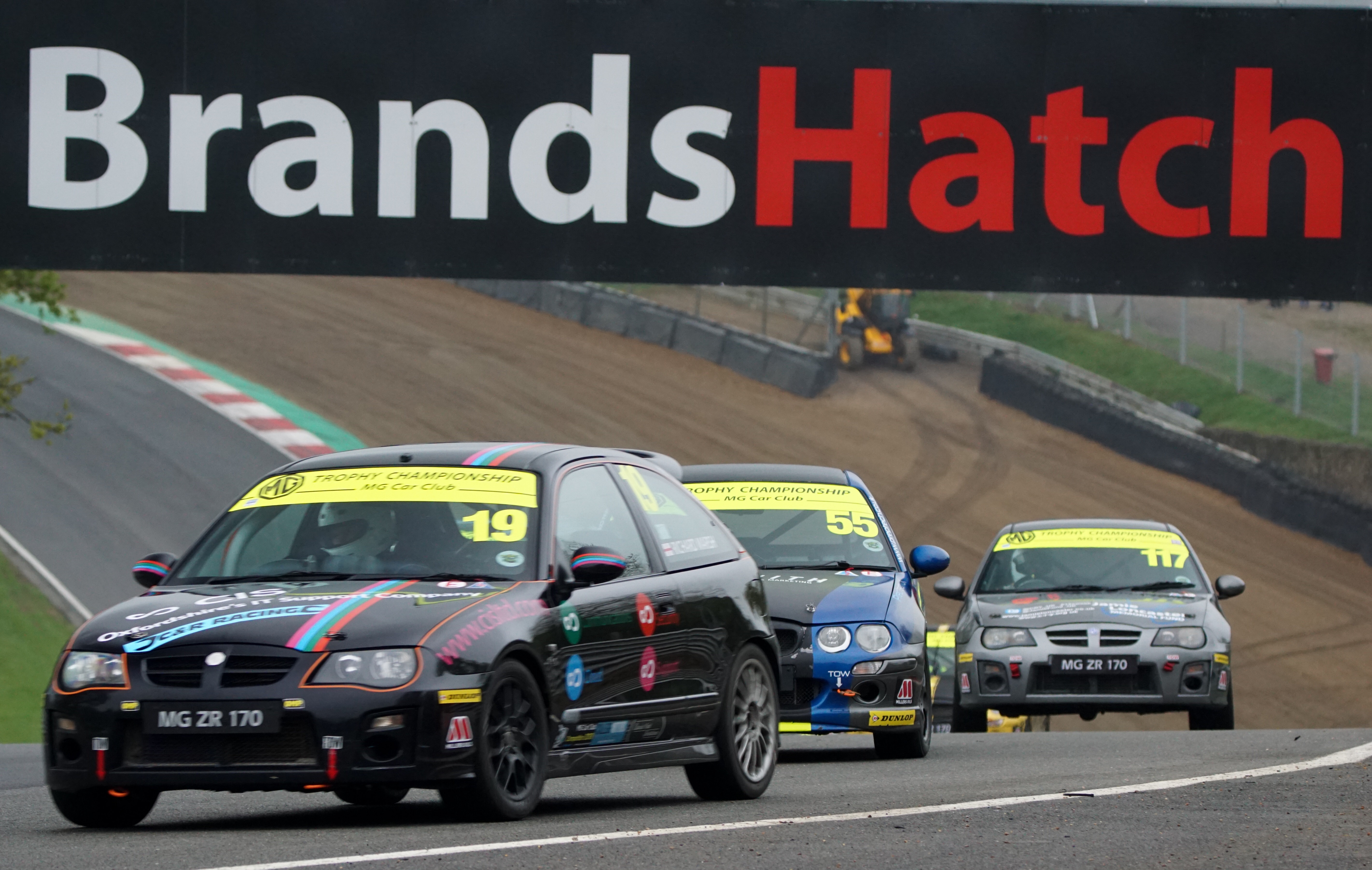 Following the first lap occurrence of 2017 I found myself with a reasonable dose of apprehension as the Championship returned to the Brands Hatch Indy circuit for its 2018 rounds. I was in fact treated to three clean first laps, although the day was most certainly not without its moments of anxiety.

What had initially looked like a healthy grid of over 30 was reduced by Saturday to 26 by the impact of competitors’ work, life, and financial commitments. This was split between 5 Class A, 16 Class B and 5 Class C.

The Friday MSV test day was well supported by the Trophy Championship. The damp conditions making it easy for those brave enough to try a dry setup to find the limit of adhesion. Finding a reasonable wet setup and eliminating any engine power issues was more the order of the day.

Three drivers returned to the MG Trophy for the Brands Hatch rounds. In Class A, 2 Chris Bray, the all-time most successful MG Trophy driver. Chris has competed in the Championship for nine seasons with an impressive total of 44 race wins, three overall Championship titles, three second and two third places. Also in Class A, 73 Ross Makar, the 2017 Class A Champion, having avoided the Silverstone rounds. In Class B, 117 Jake Fraser-Burns, who last competed in 2016.

The third and fourth rounds of the Championship were sponsored by Classic Fuel Solutions of Bredbury, Stockport, who supply two grades of highly engineered ethanol free petrol. Their Premium lead replacement fuel has been specially designed to deliver all the performance a vehicle is capable of, whilst preserving and protecting its engine. Their Supreme high octane leaded racing fuel has been developed to provide outstanding performance in classic motorsport. A display of their products was to be found in garage 1.

By 09:00 the early morning rain had stopped, and the 26 cars took to the track for their qualification session. After 3 laps the Red Flag made it’s first appearance of the day as Mills found the gravel at the end of the pit straight. A couple of laps after the restart, and with 3 ½ minutes remaining, the top 3’s were A: Burgess, Makar, Bray, B: Roberts, Turnbull, Firth(R), C: Dalgarno, Booth, Ballard. After 7 Laps A: Makar, Burgess, Spencer, B: Luti, Turnbull, Firth(R), C: Booth, Dalgarno, Ballard. Turnbull went off, but was covered by yellow flags, the remaining cars managed another lap before Spencer went straight on into the tyre wall bringing out the second Red Flag and ending the session. At the end of the session the order was A: Makar, Burgess, Bray, B: Roberts, Luti, Turnbull, C: Booth, Dalgarno, Gil.
Second Best times were A: Makar, Bray, Burgess, B: Luti, Roberts, Turnbull, C: Dalgarno, Booth, Ballard.

Chris Bray took victory on his seasonal debut in the Classic Fuel Solutions MG Trophy, but it was a race that was sadly red-flagged twice. The first stoppage came after Andy Firth crashed heavily at the foot of Paddock Hill Bend.

The grid for the restart was set by the order wound back a lap, which was to the advantage of Silverstone double-winner Jason Burgess who had just scurried through the Paddock gravel trap. Burgess started alongside Bray, therefore, but was behind the Cambridgeshire man for the five laps that were possible before another halt was called. Graham Ross jumped two places at the restart to claim third, while initial polesitter Ross Makar fell behind Andy Spencer to be the last ZR190 finisher.

The second stoppage was due to Tylor Ballard rolling multiple times and ending up atop the barriers at Paddock – a case of his race going from good (leading the ZR160 division at the first red flag) to bad (spinning on the opening lap of the restart) to worse. John Gil took the win in that class having passed Dave Heasman at Paddock on lap three. Meanwhile, in the ZR170 class, Paul Luti jumped Andy’s son Ryan Firth at the second start, having trailed behind him before the red flag, while Ollie Hood made strong progress to take third and earn the driver of the race award.

The second race was remarkable in that it looked like a ZR170, that of Paul Luti, would take outright victory for the first time in the history of the Trophy. The Scot made a tremendous start, driving around the outside at Paddock to take the lead from fourth on the grid. The cars behind him – a jumble of Class A and B machines – proceeded to fall over one another for the following six laps, allowing Luti to build a 12-second lead. But then came the safety car to recover the stricken Samuel Johnston and Ross Makar mounts… “There were a lot of expletives,” admitted Luti.

There was time for a six-lap sprint, but initial challenger Bray was having intermittent issues, leaving fellow Scot Graham Ross – a green-flag lap spinner – to take up the cudgels, battling with a bad vibration picked up from gravel trap as he did so. “I didn’t want to be the first person to be beaten by a 170,” he said, after powering ahead of Luti on the Brabham Straight at the start of the penultimate lap.

Behind Luti, who was unsurprisingly awarded driver of the race, Ben Mills and Patrick Booth were classified as third and fourth after Matthew Turnbull (third on the road) and Hood were penalised 10 seconds for a safety car infringement. After Bray’s eventual demise, Burgess (seventh overall) was Class A runner-up, having earlier been spun down the order by Bray, who lost the back end of his car when an engine fault kicked in. Gil completed the double among the ZR160s. Of greatest importance, however was the news that Firth Senior and Ballard had suffered no serious injuries.

Driver of the Day – Ollie Hood